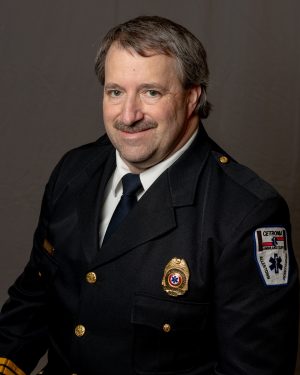 Cetronia Ambulance Corps is all about hiring veterans. In fact, we’ve attended job fairs to try to place veterans and are always happy to bring these honorable individuals onto our team. One of our longtime supervisors is the perfect example and we’d like to highlight his story here.

Supervisor Michael LaPearl has been an associate of Cetronia Ambulance Corps since November 2002. He began his career with Cetronia Ambulance Corps as a Paramedic. His resume was impressive long before he started with Cetronia. Michael served in the United States Coast Guard from 1988 – 2001. Most of the time Michael served was at Station Manasquan Inlet. He had many roles while he was in the USCG; boat coxswain, boat crewmember, Maritime Law Enforcement Officer, Weapons Officer, Officer of the Day and EMT Liaison Officer with the local EMS provider. Michael also spent time onboard two Coast Guard Cutters performing aids to navigation duties and maritime law enforcement missions. Near the end of his stint in the military, Michael obtained his Paramedic credentials from the Reading Hospital of Health Sciences (2000 – 2001). He also holds his OSHA 10 and 30 Training Certificates.

In 2006 Michael was promoted to Supervisor at Cetronia Ambulance Corps. Michael oversees 50 associates on Cetronia’s “A” Platoon. He happily leads our Strike Team. He has attended Supervisor Boot Camps and Academy along with many disaster response presentations. Michael participated in the disaster response for Hurricane’s Gustav in Louisiana, Sandy and Irene in New Jersey, and Irma in Pennsylvania. He also served on the strike team for the Papal visit in Philadelphia which took place in 2015.

He is a mentor to many through his service as an ALS and BLS Field Training Officer. Michael also teaches many courses including: ACLS, BLS, CPR, PALS, Stop-the-bleed, First Responder, EMR, and First Aid. He also conducts EVOC training with our associates.

Michael is a huge advocate for safety and was responsible for coordinating our safety apparel for the entire organization including body armor and vehicle striping. In the past, Michael was a mentor for our youth program. He also developed our driving safety programs.

Michael is an avid fisherman and each year he arranges a fishing trip for his colleagues to participate in. These trips to New Jersey are something that the crews look forward to each year. He also isn’t afraid to show off his cooking and baking skills. He makes a mean blueberry pie and was our 1st Ever Employee Chili Cook-off winner!

It’s these kind of employees that make Cetronia the great organization it is today. On this National Hire A Veteran Day which is July 24 or any other day for that matter, consider hiring a veteran. And it just so happens that we are hiring! Are you ready to be the next Michael LaPearl? Contact us today. #HireAVeteranDay