“Above & Beyond” third quarter employees recognized 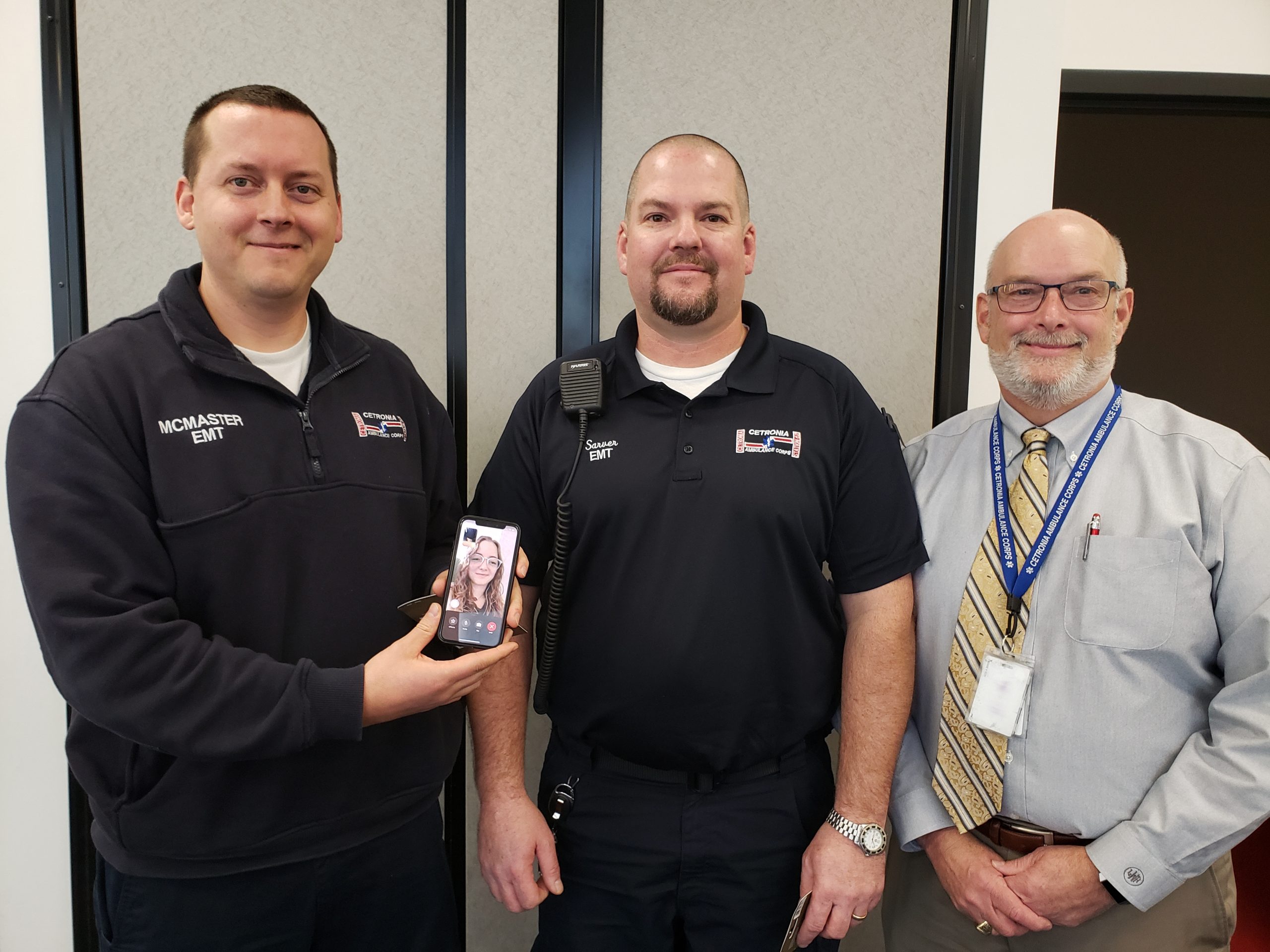 Today we held our third quarter “Above & Beyond” employee recognition awards ceremony. Cetronia Ambulance Corps recognized multiple crew members that were first on the scene of a multi-alarm fire at Heather Glen Senior Living in Upper Macungie Township. Brian McMaster, Morgan O’Donald and West Sarver will be honored on our lobby wall plaque and each received a $100 gift card.

Cetronia Ambulance Corps typically recognizes one employee per quarter for the “Above & Beyond” award as chosen by their peers, and in addition to a trophy they receive $100. There is typically a runner-up who would receive a $10 gift card, as well. The management team felt this was a very unique situation and was torn on who should receive the winning award so we made the decision to reward all three for their heroic actions that day. While there were other crew members on the scene assisting, these three employees were nominated by their co-workers for going “Above and Beyond.” We do however wish to thank each and every one of our associates for their heroic actions during the call.

The EMTs and Paramedics that were dispatched on September 22, 2019 knew they could not just sit back and watch the fire potentially destroy lives until fire crews arrived. Their instincts instantly kicked in as they drove up and saw the building on fire and they knew they had to get as many people out and as quickly as possible. Not being equipped with any firefighting gear, their adrenaline took over and they improvised to do the best they could. The crews even used the luggage carts they could find in the hallways to start transporting the elderly residents from the burning building.

Not only did they save human lives that day, they saved the resident’s two parakeets that lived in the lobby area that was quickly filling with smoke. Paramedic Morgan O’Donald noticed them as she was assisting with the residents and she knew she had to do something for the birds, too. O’Donald has two parrots of her own and knew these little parakeets could not survive the stress of the smoke and the cold air of the outdoors so she took them to the clean air of the ambulance where it was also warmer for them. Before heading out that evening, O’Donald checked with the staff at Heather Glen and asked if she could take them home until the facility had a safe location for them, which they agreed. O’Donald, dubbed “Bird Lady” by her co-workers, reports that the birds did great while they were in her care through the end of October.

In addition to assisting the residents and parakeets, the crews also helped treat two firefighters that fell on the scene. One was transported to the hospital and released shortly thereafter for their injuries.

We are very proud of all of the more than 20 staff members that coordinated the EMS operations of multiple EMS agencies that early morning. We are thankful for the heroes in EMS who save lives every day.