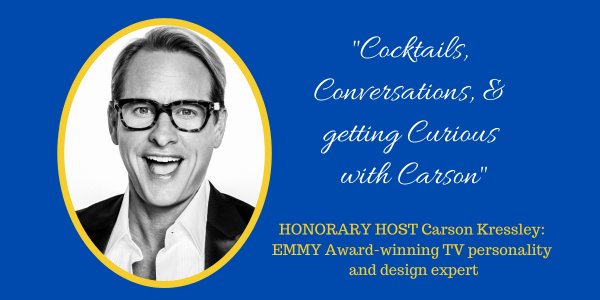 Cetronia Ambulance Corps is celebrating its 65th anniversary of saving lives in our community this year and is pleased to announce that its “Health On Wheels™” Gala will be held virtually on Saturday, August 22 at 6:45 p.m.

This year’s Honorary Gala Host will be local EMMY award-winning TV personality and design expert, Carson Kressley. Carson started his career as an independent stylist and became invaluable to major designers such as Ralph Lauren. A few years later, he took a leap into television when, in 2003, he became a breakout star as the fashion savant on Bravo’s Queer Eye for the Straight Guy, which won a primetime EMMY and gained a worldwide following for Carson which continues to this day.

Carson Kressley will be sure to have the audience laughing during his segments of “Cocktails, Conversations, and Getting Curious with Carson.” The night will also have some spectacular items to bid on during the silent auction such as a day trip with Carson to NYC including limo ride, lunch at Bergdorf Goodman and a shopping spree with a fashion consult. Attendees will be able to vote on their favorite face mask photo for $1 per vote or donate to help purchase items to support the lifesaving mission.

“We are honored and enthusiastic to have Carson Kressley serve as our honorary host at our 65th Anniversary Gala virtual celebration. The world of EMS often sits in the shadows and we hope that with Carson’s online presence we can raise awareness about the crucial state our industry is in. Our hope is that with this knowledge we will grow public support of our nonprofit lifesaving mission,” said Robert F. Mateff Sr., Interim CEO of Cetronia Ambulance Corps.

The event will be free to attend. It will be streamed on Facebook and Service Electric Cable TV channel 2 or 502, our platinum sponsor for the evening. To register to bid on items, vote or donate, visit: https://cetronia.home.qtego.net/. The public may also text to donate by sending “EMS” to #72727.